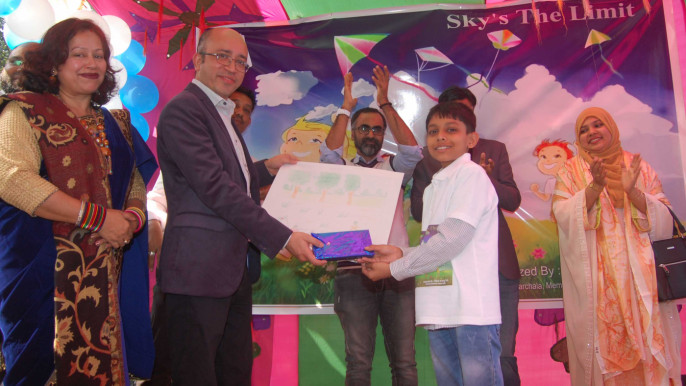 Building a bond with workers: The Silken Sewing way

When Omar Faruq was a schoolboy, he visited the Silken Sewing Ltd - a readymade garment factory located in Gazipur – holding his father's hand.

Little did he expect back then that he would play a different role than his father, Abdul Aziz, who worked as an operator at the factory.

After completing his HSC examination in 2013, Omar Faruq joined Silken Sewing Ltd as a trainee merchandiser. He continued his studies, graduated and secured a master's degree. Later, he got promoted to the planning department as a planning executive.

"The management always granted me leave to attend classes and exams. Without this support, I wouldn't be able to reach where I am now," Omar Faruq said when asked how he managed to continue studies while working fulltime.

Omar named the programme that inspired him to aim higher than his perceived limits.

"Sky is the Limit," a CSR project run by Silken Sewing Ltd, that attempts to motivate hundreds of children of the factory's workers to dream big and chase it.

Every year it invites the factory's workers and their children who are studying, gives them various gifts and inspires them to believe that they can indeed become anything they want to be.

"I used to come to the programme every year and get various gifts like school bags, T-shirt, tiffin box etc.," said Omar.

Omar now works in the management section where the top officials work, said one of the directors of the company.

Omar is not the only such employee. Abdul Kader, an IE Executive, also came from a similar background.

After completing his diploma, Kader joined Silken Sewing as a trainee in the IE (Industrial Engineering) department. Later he completed Bsc in Garments Technology from the University of South Asia.

Now Abdul Kader is responsible for 120 workers. His father, Shamsul Haque, has been working in the factory for 12 years.

Many other workers and employees of Silken Sewing Ltd are pursuing their studies under the "Sky is the Limit" programme.

This is something the visionary of the "Sky is the Limit" programme, Towhidul Alam, a director of the company, takes pride in.

"We've been running this programme for ten years. We always wanted that some of our machine operators or their children would join us at the office. Our dream is now getting fulfilled," said Towhidul.

"I always granted leave whenever someone said they had an exam or wanted to pursue a master's," he added.

There are even deeper thoughts that lay behind the foundation of the project.

"There are approximately four million workers in the RMG sector. Its socio-economic impact in the country can also have a deep footprint in the education sector if the factory-owners take extra care for the workers' children," Rezaul Hoque Rumi, an HR and sustainability adviser of the company who works closely with the CSR programmes, jumped in to explain the idea behind "Sky is the Limit" - one of the several CSR programmes of Silken Sewing Ltd.

The organisation has another CSR scheme that involves new mothers.

When a new mother re-joins work after her maternity leave, Silken Sewing gives a gift for the baby and a framed photo of the mother with her child. The worker receives the gifts and maternity benefits from the director.

"These are the things that we do outside of what we are required to do by the labour laws," clarified Rezaul. The goal is to emotionally connect with the workers, he added.

Besides, there is a skill development programme called "Sudokkho," under which the company trains local people and the freshers. After receiving the training, locals can either join Silken Sewing or join any other factory of their choice depending on vacancy.

There are some plans as well that are yet to take off. One of those is an education grant.

"Our management last year announced that workers' children would get a one-time grant based on their result in public exams," said the HR and sustainability adviser.

"We also have a plan to start evening coaching at factory premises where these children will get help with their homework for free. We could not start it due to the ongoing pandemic, but we are committed to doing it," Towhidul Alam added.

Construction of a café is also at the planning phase, which will be operated by the workers and for their fellow workers, where they can spend time after work hours.

Asked if these worker-friendly CSR activities paid off in terms of productivity or in some other way, Towhid said, that was not his goal.

"Creating a bond with our associates is the sole purpose of these programmes. I never bothered to find out if they had any positive impact on productivity or not," the director of Silken Sewing said.